Huawei Nova 6 and Nova 6 5G specifications have been tipped on Weibo just as Huawei is gearing up for its launch. The smartphone maker is set to launch the Nova 6 series smartphones on December 5 at an event in China. The latest leak has come just a couple of days after the Nova 6 live images appeared on Weibo. In the specifications leak, Huawei Nova 6 is said to be powered by Kirin 990 processor. On the other hand, the Nova 6 5G will also feature Kirin 990 processor but with Balong 5000 5G modem for 5G support.

Nova 6 It is expected to come with a 6.57-inch display with 1080×2400 pixels resolution, according to the Weibo postGeneral Chat Chat Lounge According to a previous leak, it will have a hole-punch display with thin bezels on the top and the side while the bottom bezel will be thicker. Coming to the cameras, Nova 6 will capture a 40-megapixel primary camera using capture images and shoot videos with two 8-megapixel sensors on the rear. A previous leak suggested the presence of four cameras on the back of Nova 6, so take the camera information with a pinch of salt. The smartphone will packs 32-megapixel + 8-megapixel dual front-facing cameras for selfies. 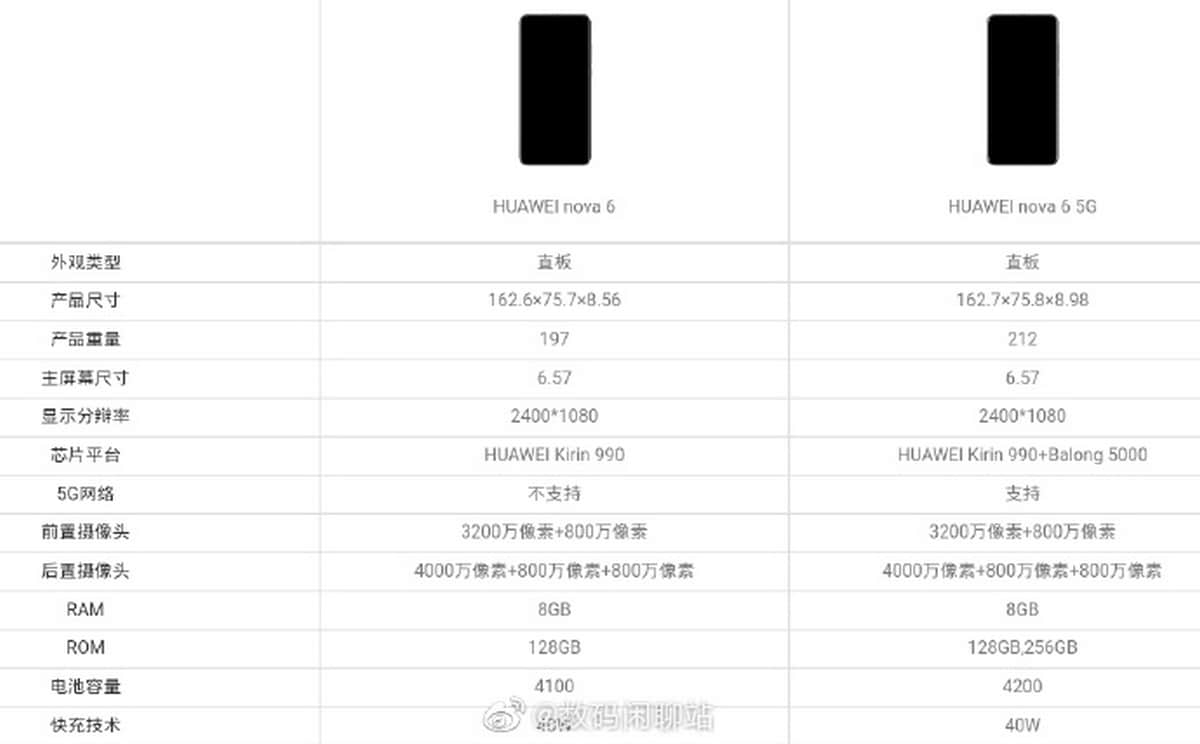 Huawei Nova 6 is said to come with 8GB of RAM and 128GB of storage. It will weigh 197 grams and measure 162.6 x 75.7 x 8.56 millimetres. Additionally, the leak also suggests that the phone will pack a 4100mAh battery with support for 40W SuperCharge wired fast charging.

According to the previous leaks, The Nova 6 will come with a side-mounted fingerprint scanner that is also the power button. The volume buttons are located above it on the right.

Huawei Nova 6 5G It is also expected to have the same 6.57-inch display with 1080x2400pixels resolution and a hole-punch design. The cameras will also be the same as the Nova 6 on both sides. Nova 6 5G will also feature 8GB of RAM but it will be available in both 128GB and 256GB variants. Additionally, it will have a larger 4,200mAh battery with 40W SuperCharge wired fast charging support. The smartphone will be slightly heavier at 212 grams. Its dimensions are said to be 162.7 x 75.8 x 8.98 millimetres.

A news junkie and politics buff, he now talks tech. He misses the days when he used to play NFS Most Wanted and Counter-Strike non-stop with his school friends.
More